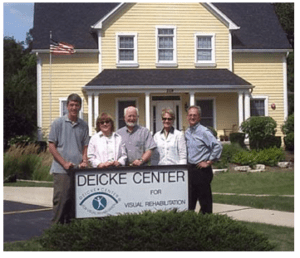 Kansas City, MO (August 10, 2007) — An historic event in low vision care was officially announced on August 10, 2007 at the third annual Envision 07 Conference in Kansas City, Missouri. As part of the keynote speech, R. Tracy Williams, O.D. described a model that has been developed over the past five months by leaders from optometry, ophthalmology, low vision, low vision rehabilitation and the low vision community, all of whom are dedicated to providing comprehensive low vision rehabilitation. The team was initially invited to the Henry Ford Visual Rehabilitation and Research Center in Detroit, Michigan on March 30-31, 2007 to address the issue, “What is the Optimum Low Vision Rehabilitation Delivery System?”

Jim Deremeik, CLVT represented the Association of Education and Rehabilitation of people who are Blind or Visually Impaired (AER)

Dan Roberts, Director of Macular Degeneration Support and the International MD Support Group, represented the consumer.
Two professional facilitators having no professional affiliation with the vision community conducted the meeting. The representatives participated on their own time and were reimbursed only for expenses incurred.

The objectives of the meeting were:

The initial meeting accomplished a draft “Consensus Low Vision Rehabilitation Delivery Model” along with general talking points describing the model diagram. It was agreed that all four professional representatives (AAO, AOA, AOTA and AER) would present the diagram and talking points to their respective association committee, council, program or related group for acceptance in concept.

The A-Team (as the study group was nicknamed) also realized the need to create a vehicle for an on-going collaboration among the four professional organizations to move forward with a common mission addressing the rehabilitation needs of the escalating population of low vision adults. In this spirit, it was decided that a third meeting should be planned to transition these ideas to other upcoming leaders in each profession along with an executive level representative from each discipline.

Expenses for the A-Team meetings were supported by an unrestricted educational grant by LowVison.com and inspiration from Takashi Yamashita, CEO of Optelec US, Inc.

We offer resources and free materials for those living with low vision.