What is visual acuity? 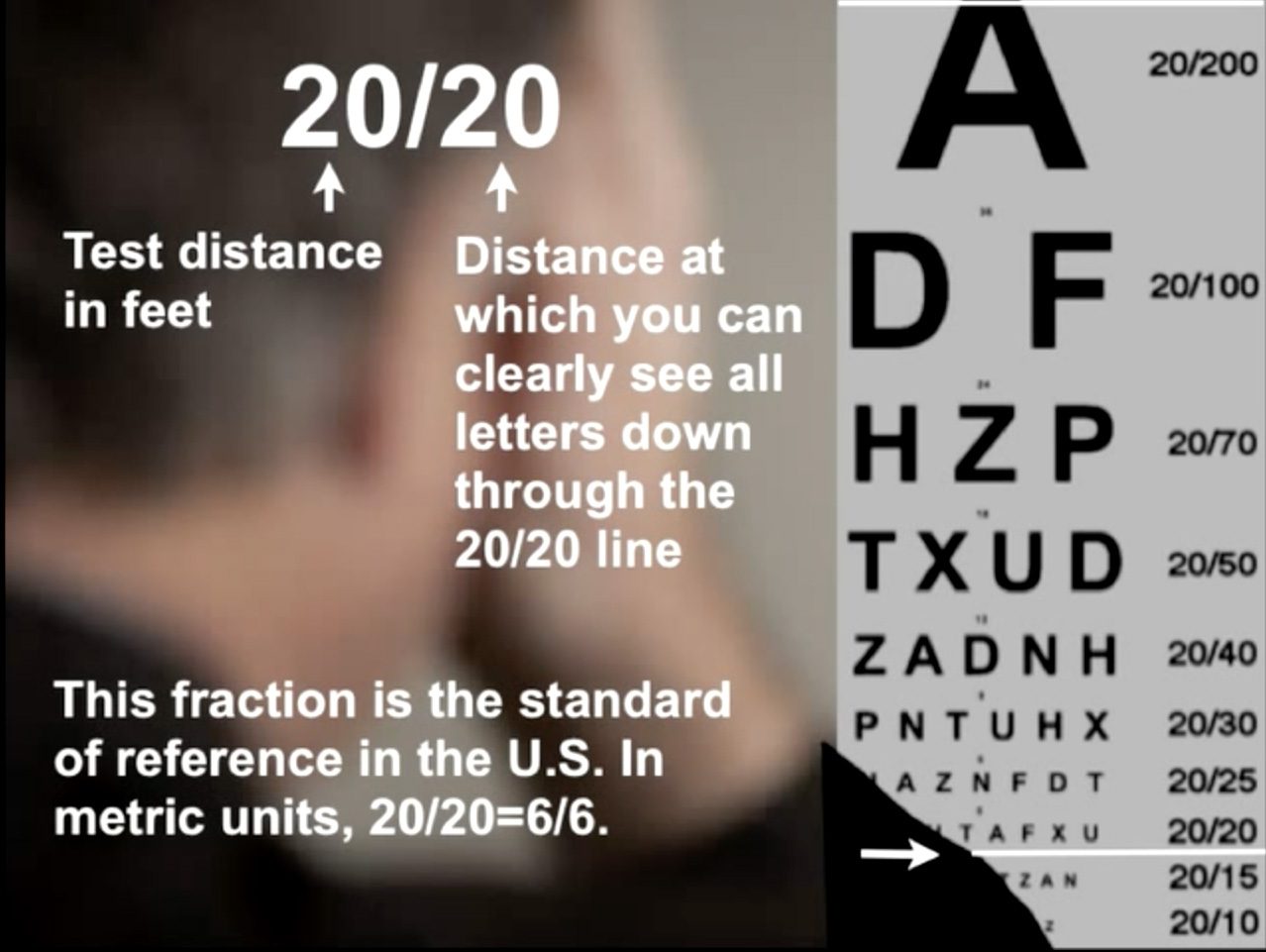 Home > What is visual acuity?

How Visual Acuity Is Measured

This information is also available as part of an audiovisual presentation, “All About Eyeglasses”.
A standard eye chart is necessary to make comparisons and to record people’s visual acuity. The most common chart used in most doctors’ offices is the Snellen eye chart. In 1862, a Dutch Ophthalmologist, Dr. Hermann Snellen, devised this eye chart. He determined that there was a relationship between the sizes of certain letters viewed at certain distances. A copy of the Snellen chart may be found here.

The Snellen eye chart has a series of letters or letters and numbers, with the largest at the top. As the person being tested reads down the chart, the letters gradually become smaller. Many other versions of this chart are used for people who cannot read the alphabet. The Tumbling E chart has the capital letter “E” facing in different directions and the person being tested must determine which direction the “E” is pointing, up, down, left, or right. A Broken Wheel vision test is one that can be used for children or those who cannot read the alphabet and the person being tested must tell which card has the broken wheels on the pictured car. Another type of eye chart that can be used is a picture chart with common pictures of different sizes. In research, another chart, the ETDRS chart, has become the standard. Originally, the chart was used in the Early Treatment of Diabetic Retinopathy Study.

The Snellen fractions, 20/20, 20/30, etc., are measures of sharpness of sight. They relate to the ability to identify small letters with high contrast at a specified distance. They give no information about seeing larger objects and objects with poor contrast (such as steps and curbs); it also does not inform us as to whether or not meaning is obtained from visual input, how much effort is needed to see clearly or singly, and whether or not vision is less efficient when using both eyes as opposed to each eye individually. In short, visual acuity measures only the smallest detail we can see; it does not represent the quality of vision in general.

August Colenbrander, M.D. (Smith-Kettlewell Eye research Institute and California Pacific Medical Center) offers a good explanation of acuity measurement. He says: “If a subject needs letters (or symbols) that are twice as large or twice as close as those that can just be seen by a standard eye, visual acuity is said to be 1/2 (or an equivalent fractional value, such as 20/40, 6/12, etc.). If the magnification need is 5x, visual acuity is 1/5 (20/100, 6/30, etc.), and so on.”

Dr. Colenbrander also emphasizes that, contrary to popular belief, 20/20 is not actually normal or average, let alone perfect, acuity. Snellen, he says, established it is a reference standard. Normal acuity in healthy adults is one or two lines better. Average acuity in a population sample does not drop to the 20/20 level until age 60 or 70. This explains the existence of the two lines smaller than 20/20: 20/15 and 20/10.

When checking visual acuity, one eye is covered at a time and the vision of each eye is recorded separately, as well as both eyes together. In the Snellen fraction 20/20, the first number represents the test distance, 20 feet. The second number represents the distance that the average eye can see the letters on a certain line of the eye chart. So, 20/20 means that the eye being tested can read a certain size letter when it is 20 feet away. If a person sees 20/40, at 20 feet from the chart that person can read letters that a person with 20/20 vision could read from 40 feet away. The 20/40 letters are twice the size of 20/20 letters; however, it does not mean 50% vision since 20/20 sounds like it is one half of 20/40. If 20/20 is considered 100% visual effiency, 20/40 visual acuity is 85% efficient.

For people who have worse than 20/400 vision, a different eye chart can be used that measures beyond 20/400 vision, or, for the most accurate measurements, a Low Vision Chart can be moved closer to the patient to measure the smallest letter that they can see at a lesser distance. It is common to record vision worse than 20/400 as Count Fingers (CF at a certain number of feet), Hand Motion (HM at a certain number of feet), Light Perception (LP), or No Light Perception (NLP). The conversion of Snellen Acuity to Count Fingers Acuity is as follows:

Get Involved / Stay in Touch